About AngelHeart and Havanese

The Havanese Dog is Native to Cuba, and is historically known as the Havana Silk Dog. At Angelheart Havanese, our show dog / breeding program is developed to focus on conformation, temperament, health, and type. Our goal is to breed to the AKC Havanese standard, and will only breed Havanese dogs that have completed their AKC Championship. We believe in the health testing of Havanese as outlined by the parent club HCA.

All of our Havanese dogs are CERF tested annually, are BAER tested as soon as possible, and at the proper age, their Patella, Hips, Heart and Elbows are registered with OFA. As our dogs complete their health testing, we get CHIC numbers on each of them. The soundness of their health can be verified by visiting Canine Health Institute. We absolutely guarantee the health of our Havanese puppies, in a written 5 year health guarantee.

Our Havanese Puppies live with us in our Missouri home. Our beloved family members and constant companions. Whether we’re just hanging out on the couch or struttin our stuff in the show ring, the relationship we have with these wonderful Havanese is one of the greatest blessings in our lives. 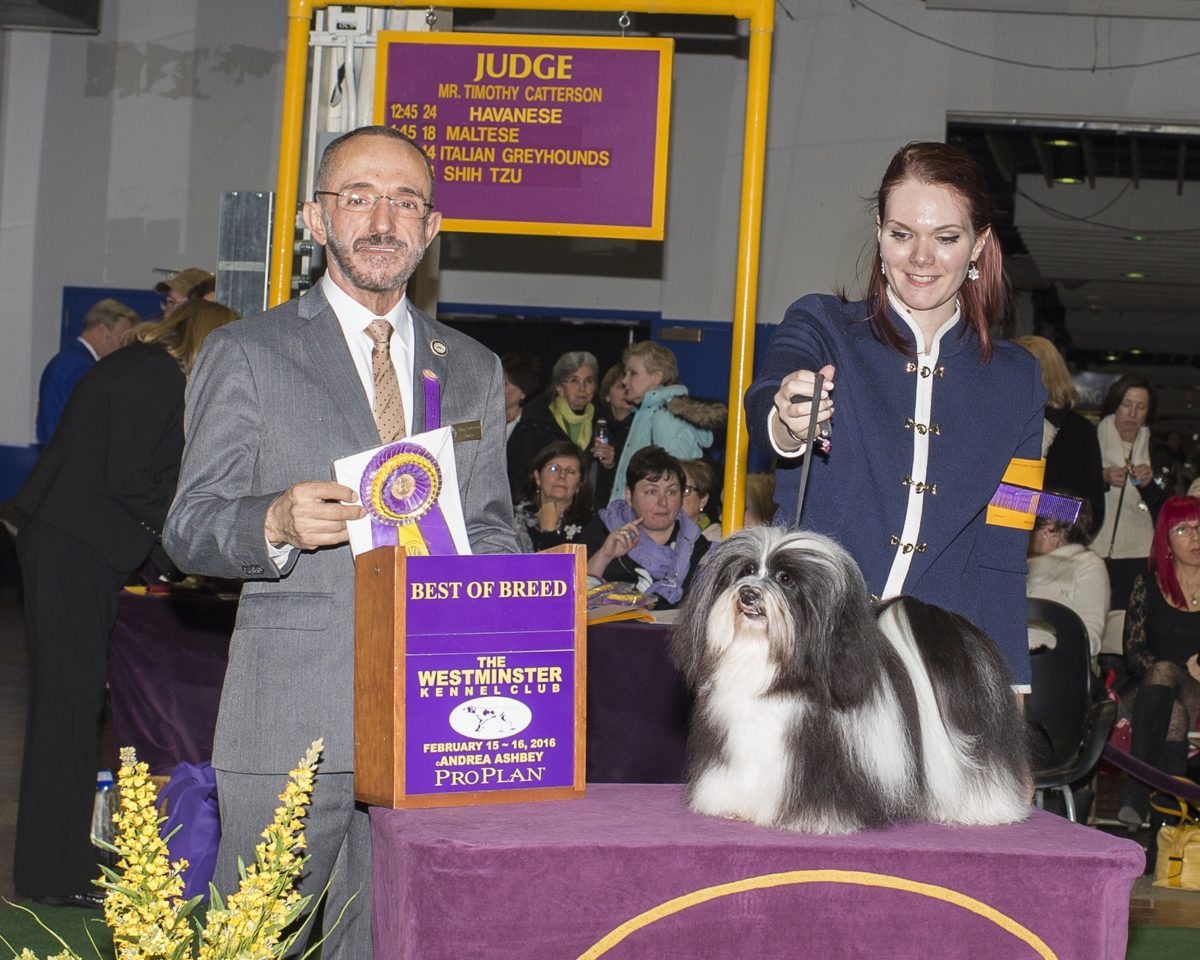 Havanese Immigrants from Cuba in the 1950's

Years We Guarantee Our Havanese Puppies

Although it is new to the AKC, the Havanese is quite an old breed in “dog years”. Its history is fascinating and important to defining type, as it is unique in many respects. The Havanese is the National dog of Cuba and its only native breed. The flag of Spain was first raised over Cuba by Christopher Columbus in November of 1492. In the ten years following, colonization was begun on the island by Spain, who owned it for the better part of the next four hundred years. The first settlers came from two distinct classes- farmers primarily from the island of Tenerife, and the “segundos”, or second sons of the Spanish aristocracy. Ship’s logs of the early sixteenth century reveal that dogs were brought along on these early colonists’ voyages, and logic tells us they were most likely the dog of Tenerife, common ancestor to all the Bichon family. Because of the draconian trade restrictions imposed on its colonies by Spain, Tenerife remained one of the only ports open to Cuba for trade, and it would appear these little dogs, who soon found their way into the homes of the resident Spanish aristocracy, developed without much outside influence. They did, however, develop in response to the climate of this tropical island. The Havanese of today is still a remarkably heat-tolerant little dog, due in no small part to the unique coat. Once called the Havana Silk Dog, or the Spanish Silk Poodle, the coat is like raw silk floss, profuse, but extremely light and soft, and insulating against the tropical rays in much the same way that yards of silk sari protect the women of India. In its native country, the coat was never clipped for this reason, and the hair never tied into a topknot, as the Cubans believe it protects the eyes from the harsh sun. In spite of the trade restrictions, Colonial Cuba developed and prospered. By the 18th Century, it was the cultural center of the New World, with an elegance that surpassed anything the British had managed in ITS colonies! The aristocracy of Europe found the city of Havana to be a great vacation spot, with its operas, theatres and palacios. On their return to Europe, they brought back the little Dog of Havannah, which found favor in the courts of Spain, France and England. In both Spain and in the court of Louis XVI, they were shorn in the manner of poodles, and were much admired for their diminutive size. The English, on the other hand, appeared to leave them au natural, and called them the white Cuban, although they were as often found in parti-colors and shades of fawn. By the mid-eighteenth century, they were downright trendy in Europe. Queen Victoria owned two and Charles Dickens had one, beloved of his seven children and named Tim. They were exhibited in the early European dog shows and type was well-established. In Cuba meanwhile, the times were changing. The aristocracy of the sugar barons was dying out and a new class was emerging, the bourgeoisie, and the little dog of Havana, adaptable as always, became a family dog extraordinaire, playmate of children, watchdog, and herder of the family poultry flock. It is a position he has held there for the past hundred and fifty years. With the advent of the Cuban revolution, the class of Cubans who owned Havanese was the first to leave. A handful of them found their way to this country, and by the end of the 70s a gene pool was being rebuilt. All the Havanese in the world today, save those from the “iron curtain” countries and those remaining in Cuba, stem from those 11 little immigrants. Remarkably, through all their travels, Havanese type has remained virtually unchanged from that of the dogs painted in the eighteenth century. To preserve it now and for the future is the challenge. Learn more about the AKC Havanese standard.